Ever wondered how translators manage to produce a coherent translation that fulfils its purpose from an unintelligible source text? Here’s an inside look at a few strategies translators use to solve the impossible.

On 31 May 2017, Donald Trump published a six-word tweet that nearly broke the Internet: “Despite the constant negative press covfefe”. The tweet was deleted after a few hours but that short period of time was enough for “covfefe” to have been immortalised in screenshots, Internet memes and t-shirt slogans. 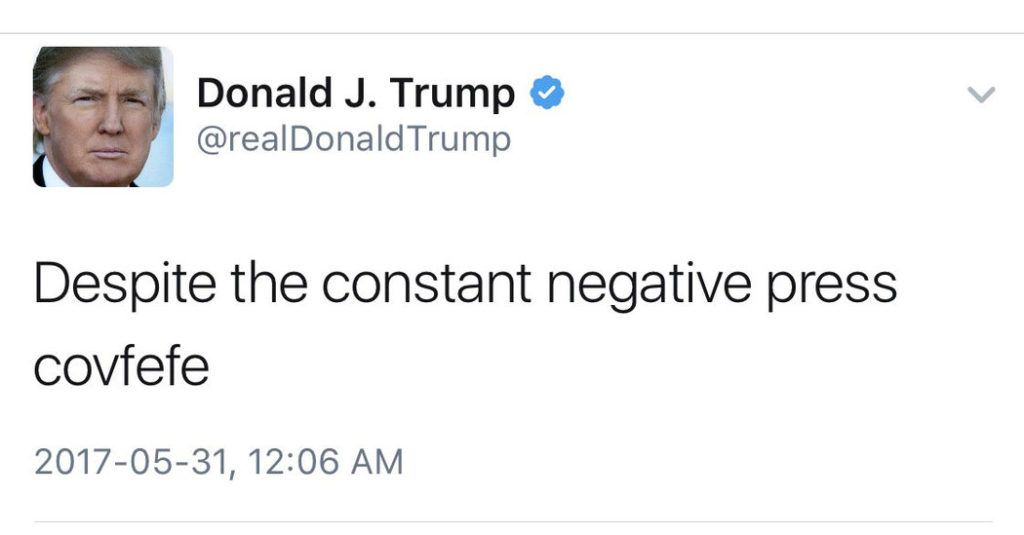 While working as an in-house translator rarely involves translating tweets, “covfefe” is a perfect representation of the type of muddled source text that can land on my desk (usually either on a Monday morning or Friday evening). However, “covfefe” is additionally challenging as Trump is the President of the US, and what he says could be significant for the whole world. Where would a translator even begin?

What does “covfefe” mean?

The first step would be to try and discern what the source is saying. At Samtext, this often involves examining the whole text for context, or contacting the client and asking them directly. However, as the only context “covfefe” exists in is a tweet and Trump is not easily contactable, these options are not possible. One theory was that if you typed “covfefe” into Google Translate, it would be revealed to mean “I will stand up” in Arabic, but this was quickly recognised as being a joke. “Covfefe” is probably a typo – perhaps Trump meant to say “coffee”, in an attempt to express his inability to deal with negative press without caffeine (#relatable). However, the Internet collective seems to have agreed that he meant to write “coverage” and, while “Despite the constant negative press coverage” is still not a complete sentence, it makes sense. Assuming this is what Trump meant, here are three possible strategies for translation.

One strategy could be to fix the typo by translating it as if it were “coverage”. While this strategy would improve the tweet’s coherence, the significance of “covfefe” would be lost as the typo would no longer exist.

Strategy 2: Leave it as “covfefe”

Another strategy could be to translate the tweet but keep “covfefe” as it is. While this could preserve its effect, this would only work for languages with a similar enough word for “coverage” that a connection could still be made, such as French (“couverture”). For languages where the word is very different, such as Norwegian (“dekning”), the connection could be easily missed, and “covfefe” might not even be recognisable as a typo. In traditional translation practices, a footnote could be added to explain its significance, but this is not possible in a tweet with a 280-character limit.

The more challenging and creative solution would be to create an equivalent in the target language that is both as obvious and ambiguous as “covfefe”. For example, “dekning” could become “dikneng”, and “couverture” could become “couvtete”. However, it would be much more challenging to replicate this effect with a language such as Chinese, where words are formed from characters that usually each have their own individual meaning.

Most probably, “covfefe” will never be translated and even Trump doesn’t seem to know what it means. However, it can be easy for a reader to not see how much thought goes into considering how to translate something, particularly source texts that contain mistakes or are unclear. There will never be one absolutely “correct” strategy for translators to use. At the end of the day, it’s up to each individual translator to weigh up the pros and cons, and pick the strategy that’s most appropriate for the situation (so please send some sympathetic chocolate and coffee with your next order!).

Who can figure out the true meaning of “covfefe” ??? Enjoy!

And oh, I almost forgot: When you are in need of a translation that has been thoroughly considered and is suitable for its purpose, get in touch and leave your text in our translators’ capable hands.